I first shot film in the 1970's. Kodachrome, Tri-X 35mm. Had a good Pentax K 1000. Then a Nikon. Anyway the sensitivity was what you who grew up digital call ISO of up to only 1600.  The cleanest look came at 100 by and large. Film developers could get you a stop or two if you needed it. Past that bring lights. Flash, strobes whatever. Build a studio.

Todays workflow goes like this... So that the following images best show the natural state of the settings there is no Photoshop, no cropping, no adjustments. I used either jpegs or camera raw as interpreted by default settings in Picasa. No noise reduction or contrast changes.

My digital cameras have always had about that level of ISO limitation. Even my 5 year old design 7D. Certainly my 40D. And 5 years is forever in digital camera design. I'm not a camera every year or two guy i have to make them last. Buy early and use it till obsolescence or major breakdown.

So yesterday I took the 7DII w/ 60mm EFS Macro out for a moderate challenge. Hummingbirds at a feeder in back-lit reflected daylight. This tested several things for me at once. First was myself. I'm starting to get familiar with a bewildering set of AF options. And some small changes in "switchology".

Once I got that going I selected what I hoped to be the right mode to lock focus onto the hummingbird like a weapons lock radar on a fighter jet. If you hand hold & pan around you complicate this massively because everything is moving in the frame. Lock the camera down on a tripod and you can really fine tune. That's what I did a little later in the shoot. But I started handheld and in familiar territory settings wise. 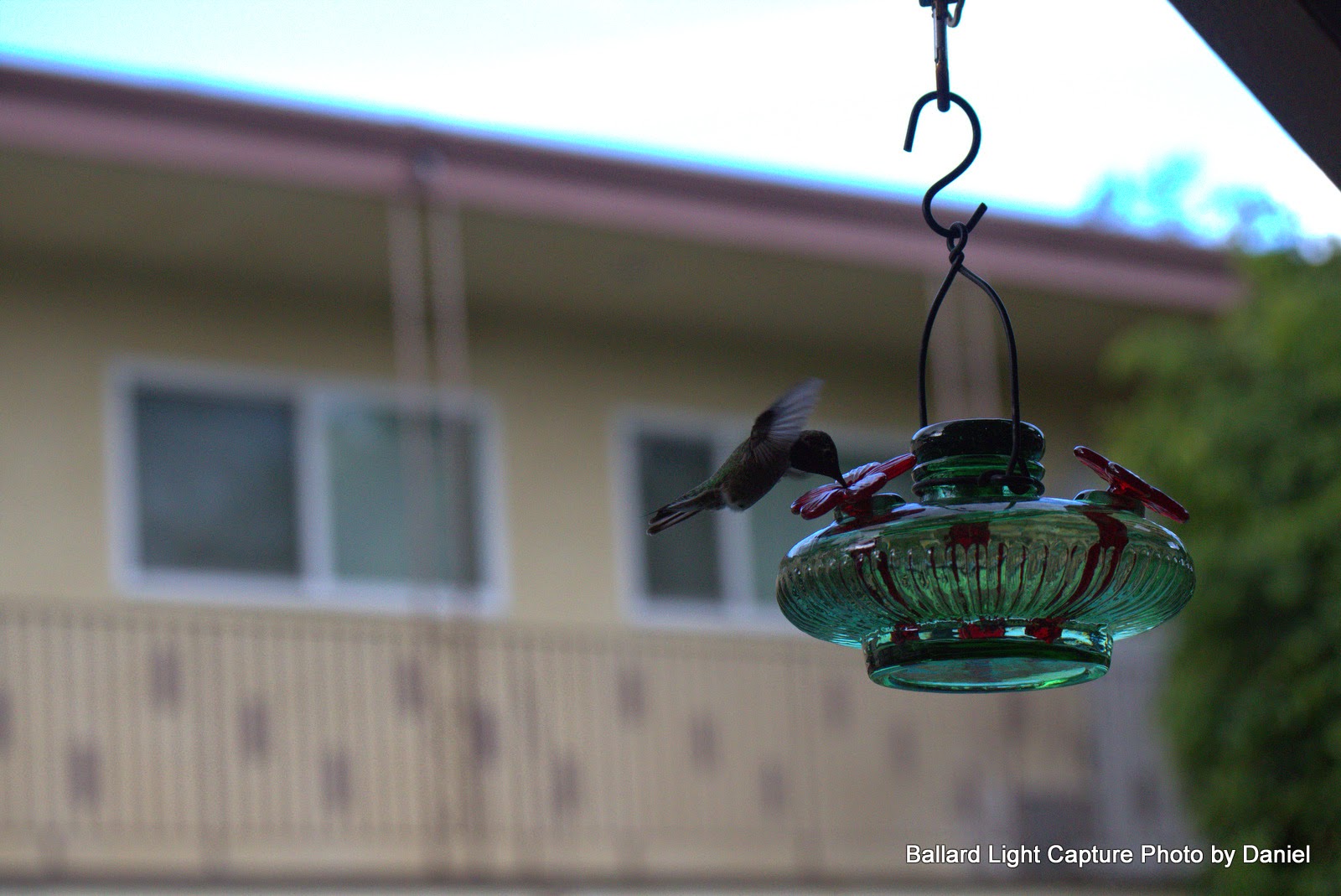 That having been established I started using shutter priority shooting at maximum shutter speeds but familiar settings from the 7D.  Like 3200 ISO  1/4000 or 1/8000. I used a wide open aperture and stayed close to the feeder so  I had DOF issues, Too shallow. Frame 0063 was F2,8, ISO 1250, 1/4000th. This left exposures a stop dark. Shallow and dark. Okay that's what my old camera was doing, and the speedlite was great to fix the light / exposure issues. 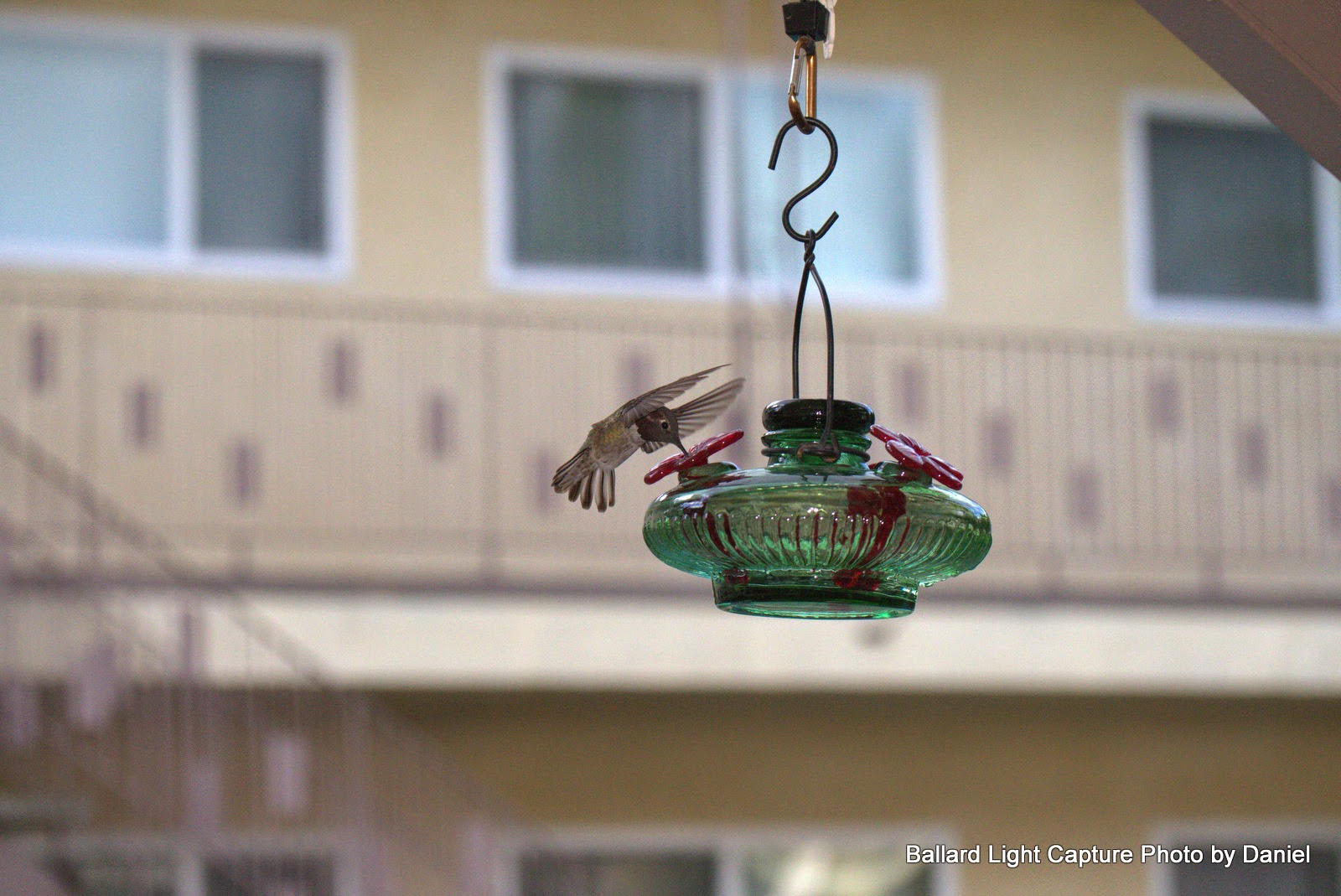 Okay I attach my Speedlite 430EX  and set it to high speed mode.Nice to use this as just fill flash given the incoming light. Not bad. Okay enough hand held, time to get the tri pod and speedlite. But time flies, it's a bit later and my light is fading. Moved the camera even closer to the feeder and get sky instead of wall for background. Now we are about 6 feet from the feeder. This really closes down the DOF.

Same lens. I decide to go for broke on ISO. 16000. Crazy high I expect serious noise. Yup sixteen thousand. 10 FPS so I get all the best moments I can. 1/4000th shutter.  The aperture is now at 8 getting some DOF back.  Still shallow but doable.

The flash can produce maybe one or two  flashes per second so a lot of frames are just natural light, back lit, and we get what we got. Because of the back lighting the bird gets silhouetted. Flash of course reverses that when it goes off. Look how little noise there is! 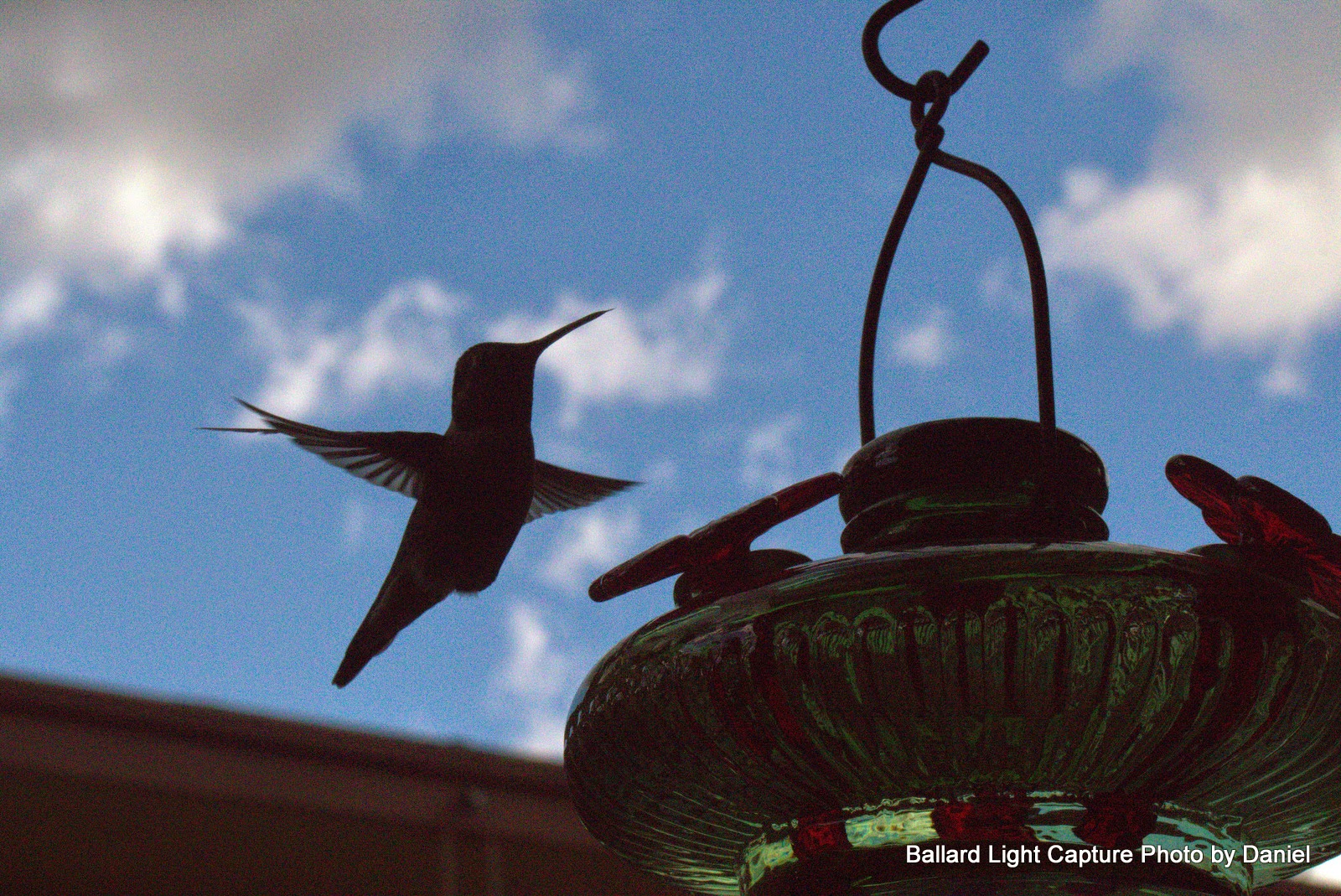 Finally I start to hit the shutter at the right moment for the bird and when the flash is charged. Not gunning it, just selectively hitting the shutter button. 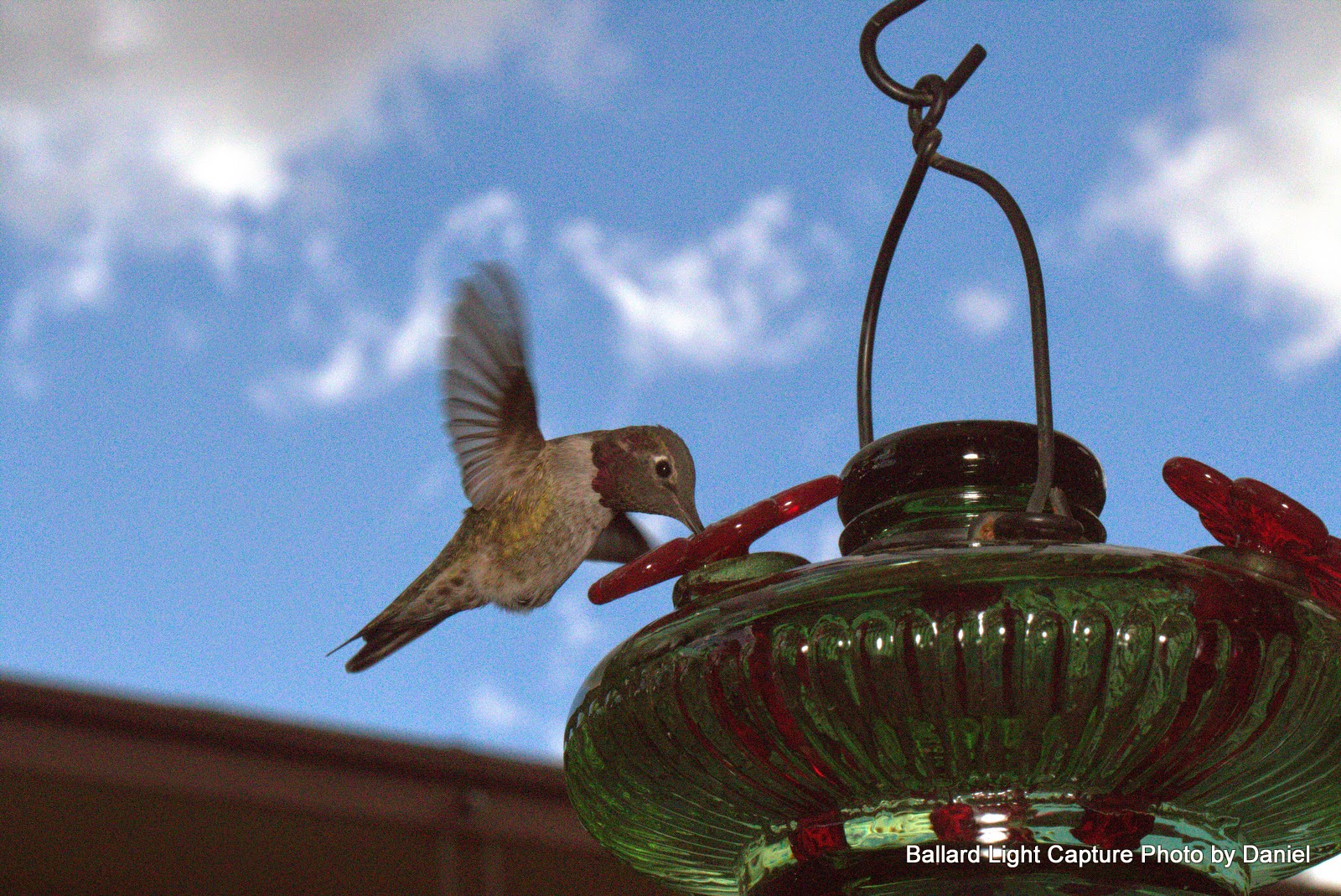 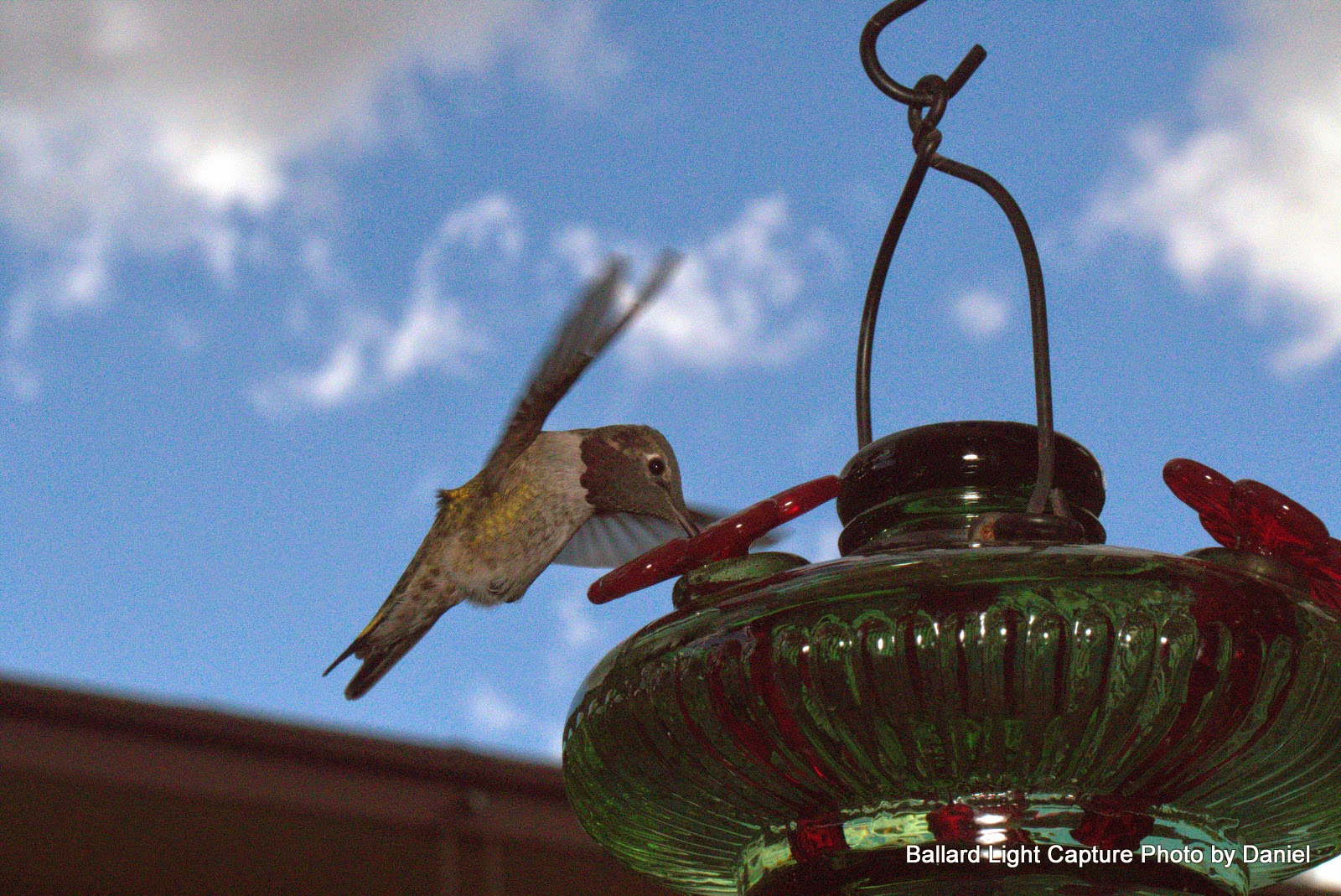 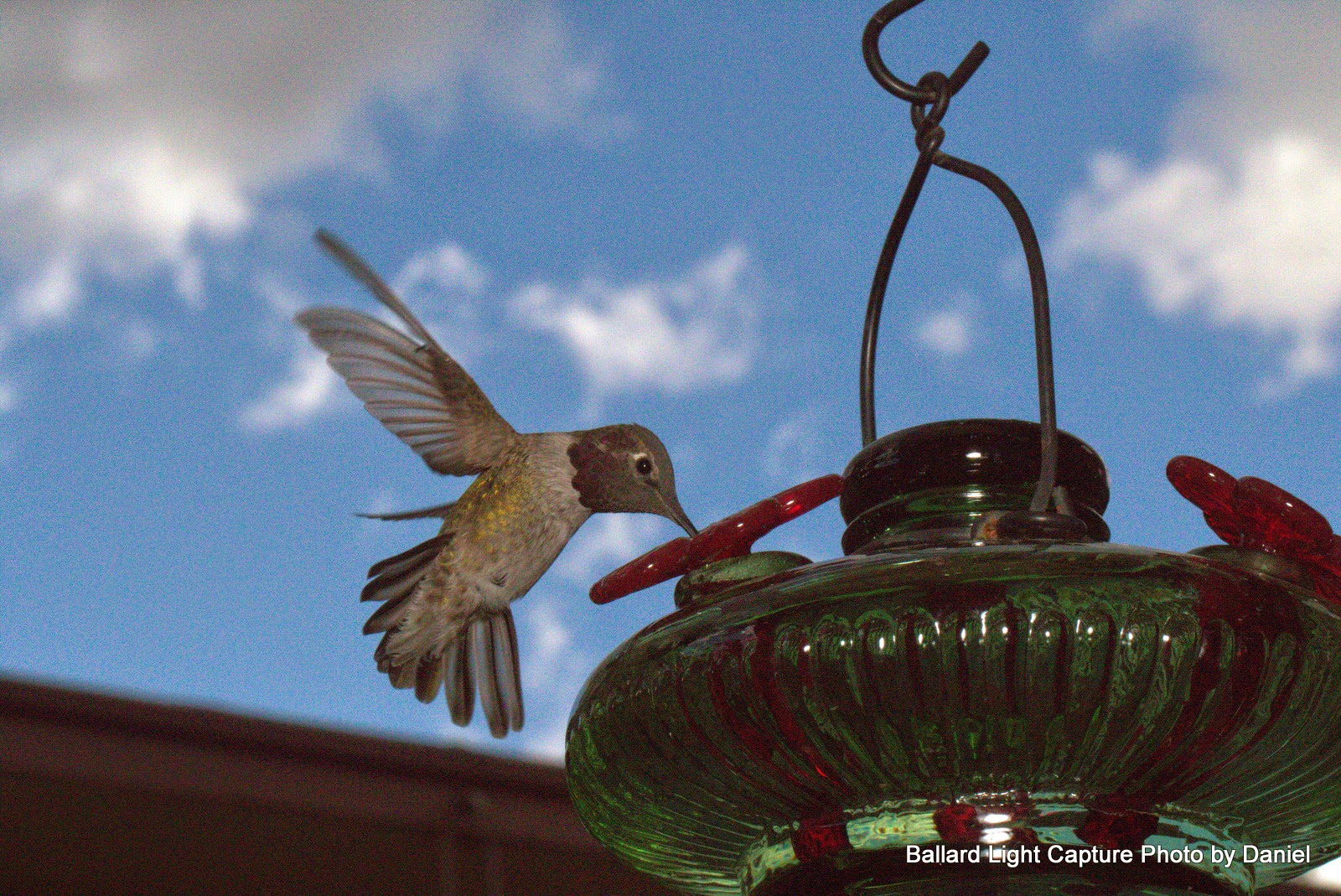 
Here is one of these cropped and worked up in Photoshop. 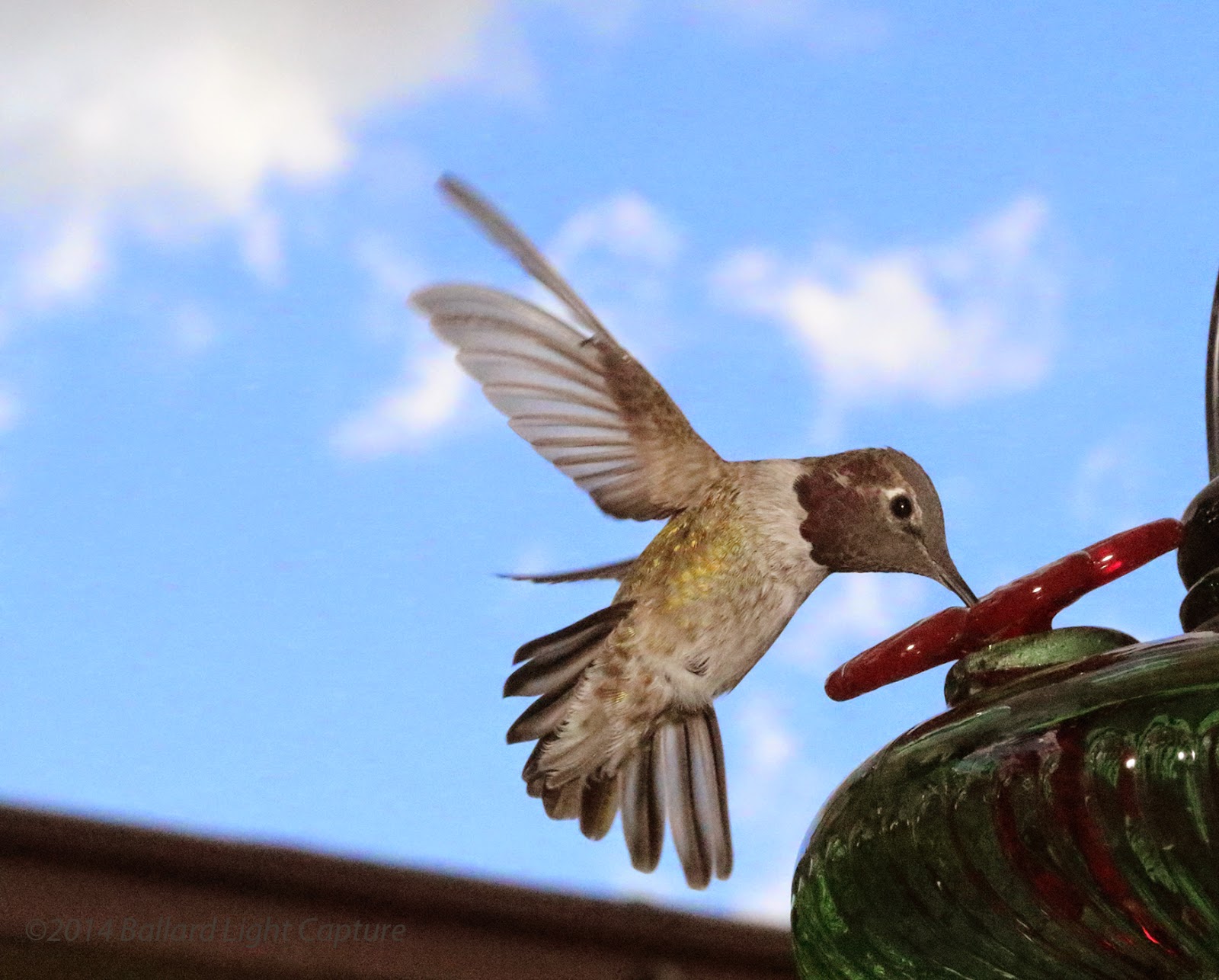 Posted by Daniel Ballard at 1:35 PM

Where we put our latest photography.

BLC is a company started by Daniel Ballard. As the name implies, this is a multi media services company. We provide photography, video, video editing and retouching services to the public and often the jewelry and entertainment industries.

We are collaboration of photographers, editors, writers and creative people. When you work with BLC, you work with a long experienced community.

We can be reached at 213-675-6178, just ask for Daniel email danielgballard@gmail.com
Having a fascination with the interplay of light and shadow from an early age, Daniel Ballard’s entrance into photography came as a natural extension of his particular view of the world around him.
His belief that photography is a tonal and compositional art balanced with a keen understanding of the technology at its core, has always served as his inspiration and continuing challenge. He appreciates the nuances of both the digital and film mediums in which he captures his subjects and different complexities the formats represent.
The most important element for Daniel is simply what ends up on the printed paper and theme and individual voice he labors to impart. As to subject matter, whether it is the work he has done in a professional capacity that has graced the covers and many pages of industry trade publications such as The MJSA Journal, Lapidary Journal, or his striking vistas of the Grand Canyon, to his intimate portrayals of basic elements of life, such as fire and water – that interplay of light and shadow is what attracts and intrigues him most.
He is self-taught and enjoys the never-ending process of learning that photography brings.